On Saturday, May 25, 2019 music fans and others who love outdoor events in Wisconsin will assemble in Maiden Rock for the 6th annual Rush River Folk Festival. All who attend will enjoy exquisitely prepared food, drinks, and live outdoor music in a lush river valley setting, from 1pm until sunset. This annual event is hosted by Vino and the Valley, a perfect place for friends and family to get away from it all close to home and enjoy music from an outdoor stage, tasty food and beverages, and the beautiful spring feel of a day outdoors at a premium location. There is no cover charge for admission to this event.

The headlining musical act for Rush River 6 is Davey J (David Jones), the founder of the Rush River Folk Festival. Davey J is known around the Chippewa Valley and beyond for his creative projects as a musician, songwriter, and music scholar. His radio show, Jazz, Blues, and Beyond, can be heard on Converge Radio in Eau Claire (99.9 FM).  Davey J’s newest creative venture is a soundstage and screening room for independent musicians and filmmakers, Davey J’s Garage, located in historic Banbury Place, a converted factory in downtown Eau Claire. As a musician, Davey J’s accomplished songwriting is documented in the six original music CDs he has released over a twenty year period: Chippewa Love (2015), Visions (2013), Hippie Child (2011), What is the Meaning of Parsley (2002), and Jones Tones Featuring Davey J (1998).  His versatility and smooth, passionate delivery across the genres of folk, blues, rock, and reggae is on display at every performance, driven by his signature rhythmic style of acoustic-electric guitar and a highly expressive vocal style.

Lonesome Dan Kase makes a first-time appearance on the stage at the Rush River Folk Festival. As a teenager growing up in rural southern Michigan, Lonesome Dan Kase happened upon a radio show called the “Blues Cruise,” broadcast out on Ann Arbor. Although he had picked up the guitar a year or so before, when he began hearing artists like Reverend Gary Davis and Robert Johnson, he quickly became hooked on the country blues. Like many of the blues musicians from the early 1900’s that are his biggest influences, Lonesome Dan developed his musical art traveling around the country busking on street corners. After spending time in California and New Mexico, Lonesome Dan ended up in Denver, Colorado, In 2001, Lonesome Dan moved to Minneapolis, Minnesota and immediately began playing shows as a solo act. Within a year, he formed a band called the Crush Collision Trio, and since then, Lonesome Dan has become a fixture in the thriving Twin Cities blues scene, with guitar technique that is influenced by boogie-woogie and blues piano, classic folk and ragtime piano, and blues guitarists from the Mississippi to Chicago.

Matt Yetter is also a first-time performer at the festival. His rootsy style of guitar, voice, and harmonica is the real deal; he is an old-school, slide guitar playing, harmonica-tooting country blues artist who characterizes music as “a way of making a connection to everybody all at once.” An established Minnesota musician for more than 30 years, Matt discovered he could sing in 2010 after years of playing electric lead guitar and mandolin in bands. His stage show is steeped in passion and virtuosity with his resophonic slide guitar, harmonica, and newfound vocal skills. Regularly playing old-time blues from the 1920s, 30s, and 40s all around Minneapolis, Matt has created his own niche – a vibe that’s hard to come across anywhere else. Like many other jazz and blues musicians, Matt’s ideology is to “carry on the tradition of the music, do your own versions of some of the classic songs and make them your own, as well as contribute to the tradition.” That’s what he’s doing, from the jangle and slide of his guitar and the croon of his harmonica to his rich, compelling vocals.

The festival opens with regional favorites Little Wing, led by Faith Ulwelling, who is well-known around the Chippewa Valley, Durand, and Maidenrock as the powerful lead singer for Left Wing Bourbon.  Her vocal skills have a deep range of influences, from Aretha Franklin and Etta James to Janis Joplin and Chaka Khan. She will perform in a duo format as Little Wing, joined by guitarist Tim Caswell. Performing acoustically, Little Wing is a confluence of regional musical streams, with elements of jazz, soul, blues, and funk combining for a supreme folk music experience.

The 6th annual Rush River Folk Festival will provide an awesome day of music, food, and friends. Join us! 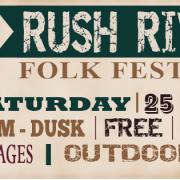 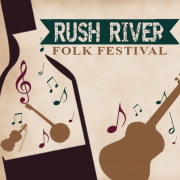 Celebrate Mother’s Day Weekend at Vino in the Valley