The 7th Annual Rush River Folk Festival will take place at Vino in the Valley, Maiden Rock, WI, on Saturday, September 5. Three regional musical acts will provide two-hour outdoor concerts during the event, with tasty Italian food, wine, and other beverages available for enjoyment. This family-friendly event is normally held on the Saturday of Memorial Day weekend, but for 2020, special planning has been dedicated to creating a safe and enjoyable experience at the vast and scenic outdoor venue, Vino in the Valley. As always, there is no admission charge for the festival. Guests are invited to bring blankets and lawn chairs and enjoy the music, food, and drinks at comfortable distances.

The headlining combo for 2020 is a regional favorite for a reason: excellence and passion in musicianship that is second to none. At 6 pm, Little Wing will take the stage for a specially featured show at the Rush River Folk Festival. Little Wing offers a confluence of regional musical streams, distilled from their big band combo (Left Wing Bourbon) to provide a fabulous folk flavor as a duo. Seasoned with years of hosting and playing at Blues jams, they consistently move the masses to swing their hips at summer festivals, mixing soul, boogie, and funk into a kinetic Blues cocktail guaranteed to get you groovin’. Lead singer Faith Ulwelling’s vocals channel 60s soul and Delta grit and her versatility in performing blues, jazz, and roots music is highlighted when she performs as a duo with Tim Caswell on keyboards and guitar. Performing for the first time as the headlining act at Rush River, their music set will be one to remember!

From 3:30 to 5:30 pm, the bluegrass duo Barrell Flash from the Twin Cities will bring their melodic sound to the stage. Barrell Flash features Julia Brown and Ross Johnson, songwriter/performers who explore wide style and emotional territory, with thoughtful original songs on topics old and new. Julia is a trained classical vocalist and theatre professional who writes songs with sensitivity, and sings them with power. Ross is a blues, Britrock and roots musical devotee, pushing blue-eyed blues vocals. and is a sucker for a good guitar hook. His songs evoke bygone times and lonely places. Barrel Flash also lovingly offers new twists to older and newer popular songs. 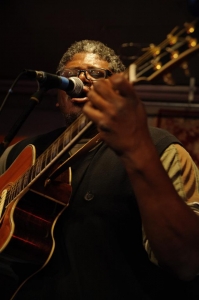 Davey J and Duffy are the leadoff performers for this year’s event (1 pm – 3 pm), two Eau Claire-based musicians and friends with a long history together. Both Davey J and Duffy offer a broad repertoire of originals and favorites in the styles of folk, blues, and Americana. Davey J (David Jones) became established in the region as bandleader for the Jones Tones, a blues, rock, and variety band that performed on stages large and small across Wisconsin and Minnesota for nearly 20 years. Davey J’s recent musical activity includes work on two new CDs (tentatively titled 2020 Blue and Life is a Love Mix), production of a weekly radio show for 99.9 FM Converge Radio in Eau Claire (Jazz, Blues, and Beyond), and a venture into studio production and sales of acoustic guitars (Davey J’s Garage). Duffy (Duyfhuizen) performs frequently with his roots Americana combo, Eggplant Heroes) as well as performances as a soloist. Duffy’s musical rapport with Davey J goes back to their years of performing together in the Jones Tones band, but Duffy’s own style shows a great deal of musical versatility. Musical influences vary from Bob Dylan, Bruce Springsteen, and John Prine to recent songwriters with a folk spirit. This will be the first Davey J and Duffy performance in a number of years, and the show will be full of highly engaging musical moments.

This year’s festival continues the collaboration between Davey J and Vino in the Valley to celebrate the thriving regional scene in Western Wisconsin as well as the Twin Cities. Please contact Davey J for more information about the festival (715-602-3039). We sincerely hope to see you at the festival, and together, we will have a joyful musical experience on Labor Day Saturday. Thank you and best wishes for a safe summer!